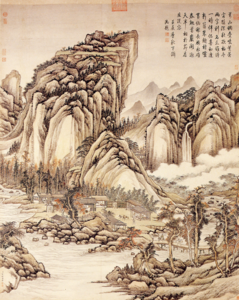 Even as China is expanding its economic, technological, and military prowess, it is at the same time entering into its death-throws—a dubious fate for one of the oldest and most venerable cultures in the world.

The two processes are connected: though it may be counterintuitive, it is all too familiar: cancers grow themselves to the point where they kill that which provides for their continued existence. Cancers do not have free will; more is the pity for nations governed by humans which do, yet choose the same path forward as cancers.

Respecting China; on the one hand, you have a sovereign nation aspiring to greater geopolitical influence in the wake of a period of unprecedented economic growth; on the other hand, you have a government so intent on maintaining and expanding its domestic and international control, that it is actively promoting policies which are cutting China off from its traditional sources of renewal.

Societal renewal begins in free will. It is free will that forms the basis for diversity. Diversity ensures that in the face of emergent challenges, all bases are covered. ‘All bases covered’ ensures there will be time and resources to cultivate and strengthen the processes of renewal in the face of new, perhaps unanticipated challenges.

The oldest lie on human record is that it is necessary to control peoples’ thinking and to resort to violence when necessary, in order to preserve and protect the state. The extreme condition is the police state. In the ‘police state,’ everyone lives in fear of both the lie and the truth, since either can be used by one’s enemies against them. No one—particularly those who are prospering under the regime—ever says what they really think. It is always best to parrot the party line, the party idea.

But the state is no longer protected by the ‘idea’ that led directly to its current form and status, since the idea was only relevant to the condition of the state at a time which is now past. The state has been subsequently reconceived and the challenges it once faced, overcome.

The idea, however, is still in force. The government is now fighting to preserve an idea associated with a condition that no longer exists. The government mistakenly identifies its continued existence with the idea which got it there.

Does anything remain the same throughout its lifecycle? Do needs not change substantially over the course of the lifecycle? Adults cannot thrive on Pablum any more than states can thrive on anachronisms. No one can prosper in today’s world equipped with yesterday’s ideas or yesterday’s technologies.

States are properly viewed as collections of citizens organized by rule of law, custom, and common aspirations. Renewal comes in the form of ideas—new ideas— such as the ones that led to the creation of the state before it existed.

To fight for the preservation of old ideas is tantamount to closing the door on progress and the processes of renewal. It ensures the demise of the government-society rather than prevent it. You are trying to dig yourself out of a hole. When governments do violence to their own citizens, they weaken their societies, and their positions of authority within the society, rather than strengthen and preserve them. Something other than a shovel is needed to get out of the hole you are now in.

The persecution of Falun Gong practitioners is one example of the current regime’s intention to keep its hand on the tv channel selector; in order to ensure their folks have the ‘free will’ to come up with the exact same thoughts as the government. You can read about it here:

The philosophy the Chinese government desires to squelch could be precisely what the Chinese nation needs, at some point in the future, to keep growing and to capitalize on its successes —however in partnership with the other nations of the world and not master over any but themselves.

The persecution of the Uighurs of Xinjiang province is another example of the state’s program of persecution against ‘heresies.’ An informative and honest article on the subject is here:

At the end of the day, if one’s focus is squarely on preserving the status quo, then one is looking backward rather than ahead—one is missing opportunities to renew and to reinvigorate because one is not looking for them. One is looking only for ways to enhance control. To my knowledge, only the mythical Lucifer of Milton’s Paradise Lost prefers mastery over a dung hill to serving with a team in a paradise; a team which would include not only governing mandarins, but also the citizenry—past, present, and future.

If the Chinese government continues on its present course, the Chinese nation will end up being such a dung hill. It is inevitable. They will never again experience the joy, peace, and security which comes of camaraderie, shared responsibility, and the exercise of free will.

If anyone doubts this, all’s one has to do is to look at the success which Emperor Constantine purchased for the Christian Faith, by ‘normalizing’ the religion so that he could use it to normalize his empire. Irenaeus wrote his Against Heresies,[i] many early Christians were persecuted, murdered, ostracized from the faith—along with their heretical ideas—‘heretical’ because there happened to be more power behind one system of belief than behind the others. Christianity could very well have remained ‘One Faith’ had Marcion’s views not been rejected at Constantine’s Council of Nicaea—we’ll never know. We can reasonably surmise, however, that Constantine et al. were more interested in arriving at one version, rather than at the objective truth about Jesus and his ministry. We might have been spared a lot of bloodshed between that day and ours if Constantine had been more interested in learning the truth rather than in creating it. Creating truth is a job for the Creator, alone. It will buy trouble for anyone else who attempts it; particularly governments.

We have lived for nearly two millennia with the outcome of Constantine’s coup de la vérité. We’ve seen the misery created as Constantinian Christianity expanded and squelched all deviants. They were positioned, by virtue of Constantine’s ‘idea’ of normalization, to reject all other ideas and even to silence them. Then, with the onset of the Reformation, Christianity exploded into several different flavours, each purporting itself to be better than the others. So much for squelching human creativity.

I pray the Chinese government, populated as it is with enlightened Chinese people, themselves deriving from millennia of free-spirited, free-thinking Chinese folks, will protect the Chinese culture and traditions, those which got them to where they are today; to keep them strong and viable through the years ahead, as partners in the Creator’s world.

Not seeking to be masters, à la Constantine, over what would certainly become a dung hill.

[i] You can read about Against Heresies here: https://en.wikipedia.org/wiki/Against_Heresies_(Irenaeus)

n.b. Image taken from get.pxhere.com – if it is not public domain, please advise and it will be removed.